YOU WANTED THE BEST!
Seldom do bands come along that leave such an indelible mark on popular culture. During the 1970s KISS redefined what it meant to "entertain" people with their bombastic live performances and larger than life personalities. During the 1980s the band fought for survival as internal strife and external competition forced the band to attempt to reinvent themselves. The early 1990s had seen KISS make one final attempt to be a relevant musical force, but it did not translate into the demanded success. Instead the band started looking to the past. The "Reunion" allowed the band to play their final "Ace" card. The "KISS Album Focus" is an objective look at the history of "the hottest band in the world" that destroys some KISS urban legends and confirms others. Volume 3, "Road of Greasepaint" picks up the history of the band as they attempt to record a "Reunion" studio album, and the disjointed soap-opera that followed and continues... 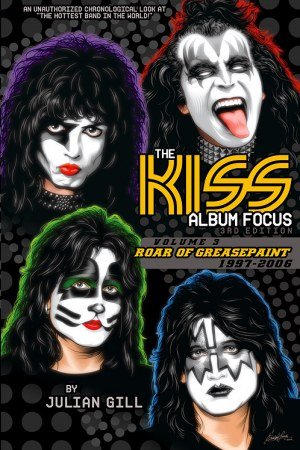 
In the introduction to the KISS Album Focus I stated, "In a work of this scope there is always the possibility (probability) that errors and/or inaccuracies have slipped past my proof-reading and continuous revision". Sometimes, no matter how much work has gone into the research and revision process, shit happens! Next to the page number are three different denominators: (SC) - Softcover; (HBI) - Hardbound, Illustrated (also available as a softcover)...